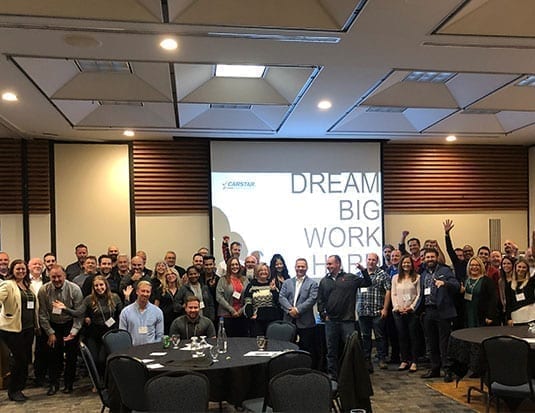 CARSTAR has announced the successful completion of its EDGE Performance Group Meetings across Canada this fall.

Each CARSTAR location from its respective zone joins these coast-to-coast meetings, which are held on a biannual basis. The meetings offer a platform to the CARSTAR locations to participate in financial focus groups and discuss best practices, in collaboration with key industry partners and corporate leaders.

During the course of the meetings, CARSTAR also sold holiday sweaters, the proceeds from which were donated towards fighting cystic fibrosis.

Zone Director Dave Meery, along with Area Manager of Operations, Clint Bohnet led the EDGE Performance Group meeting of the eastern zone, which was held at Dartmouth, Nova Scotia. The meeting saw a record turnout, according to CARSTAR. The agenda of the first day included discussions on financial growth and profitability. The focus was on operations on the second day. Guest speakers from one of CARSTAR’s valued insurance partners presented at the event.

Franchise partners from Quebec came together to attend the meeting in the region, held at Lac-Beauport. Vendors and insurance partners discussed about advancements in the industry. Additional, attendees had the opportunity to listen to leaders from the CARSTAR operations team who discussed operational and financial best practices.

The EDGE Performance Group meeting of the central zone was held in Hamilton, Ontario. Attendees had the opportunity to listen to valued vendor partners as well as tour CARSTAR Hamilton Gage. The facility opened up its doors to showcase its implementation of 5S initiatives. Operations and financial discussions were the focal points of the breakout sessions. The second day included corporate updates, and discussions on industry trends and strategies to improve the length of rental.

CARSTAR hosted its western zone meeting in Edmonton, Alberta. According to the company, the event recorded high attendance and was greatly successful. A franchise partner panel discussion held on the second day was one of the highlights for this team. During this discussion, best practices regarding estimating, profitability and operations were shared.

“The CARSTAR EPG program continues to accelerate CARSTAR’s strong performance and helps us deliver the collision repair industry’s highest-quality vehicle repairs,” said Dean Fisher, President of CARSTAR.  “This is just another tool we use to achieve industry-leading levels of operational excellence as well as new levels of customer satisfaction. In true CARSTAR fashion, we were also elated to see how eager our franchise family was to contribute to our charitable cause, through our holiday sweater fundraiser.”

In a statement released by the company, CARSTAR thanked Axalta, Akzo-Nobel and BASF for not only supporting but also engaging in its EDGE Performance Group meetings.