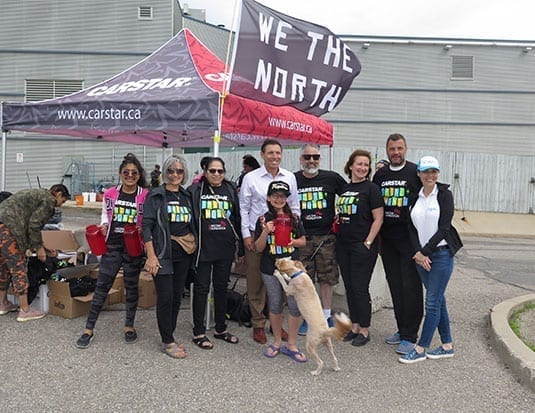 CARSTAR has announced that the network was able to raise a ‘milestone’ amount of more than $100,000 for cystic fibrosis (CF) research, advocacy and care in June this year.

This network-wide event is celebrated every year in June, which has been named as the ‘Shine Month’. During this month, CARSTAR locations across North America undertake fundraising activities for cystic fibrosis. The network’s franchise partners hold car washes, participate in the Walk to Make Cystic Fibrosis History or walk in Great Strides to help engage their team and community in raising funds and awareness.

“We have gotten to know families in our area affected by cystic fibrosis through our fundraising efforts, which motivates us more to help this cause,” says Wayne Minogue, Owner, CARSTAR London East and CARSTAR London West. “My wife Luci along with Jeff and Nancy Vanleeuwen completed our annual Walk to Make Cystic Fibrosis History. This is now a three generational event for our family as our brand-new granddaughter was able to participate in her stroller this year, which meant a lot to us.”

Additionally, the Minogues joined forces with other facilities such as CARSTAR Toronto Millwick to directly donate $1,000 to Cystic Fibrosis Canada. This initiative was to commemorate the network’s 30th anniversary during Shine Month.

“Giving back is ingrained in us, so it really is a no-brainer to contribute to the CARSTAR cause, Cystic Fibrosis Canada, especially after we hear their impactful stories,” says Ralph Andreaachi, Owner, CARSTAR Toronto Millwick. “Our team just wants to do what we can to make the lives of those living with CF a little bit better.”

CARSTAR’s fundraising activities for cystic fibrosis in Canada have been active for more than 20 years. They were initially prompted by the CF diagnosis of a franchise partner’s granddaughter. Since then, the network has committed itself to this charitable cause, with the total amount raised for Cystic Fibrosis Canada crossing the $3 million mark in 2016. As of now, CARSTAR has raised more than $3.7 million is now also receiving extra support from franchise partners in the U.S.

“Our commitment to cystic fibrosis runs deep within our corporate culture at CARSTAR, so it makes sense to celebrate our charitable partner for June’s 30th anniversary,” says Michael Macaluso, President, CARSTAR.

A fatal genetic disease, cystic fibrosis has no cure. It primarily affects the lungs and the digestive system.

“We are grateful for CARSTAR’s enthusiasm and dedication to raise funds, awareness and help advance the mission of the Cystic Fibrosis Foundation,” says Elizabeth Thompson, Senior Director for National Corporate Engagement, Cystic Fibrosis Foundation. “CARSTAR is steadfast in their efforts to support the cystic fibrosis cause across North America and we cannot wait to accelerate this momentum. It is because of companies like CARSTAR, we believe that one day CF will stand for cure found.”