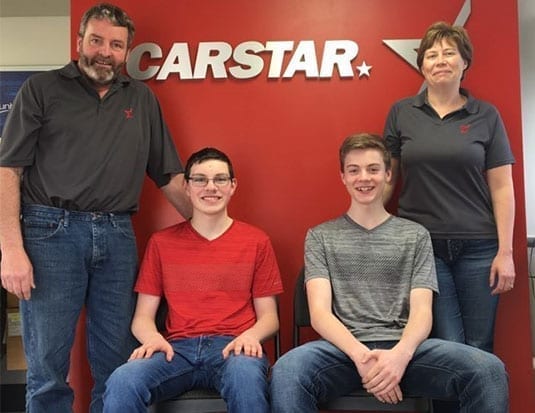 CARSTAR has announced the addition of a new facility, CARSTAR Vermilion, in Alberta.

The repair shop is located at 5118 Railway Avenue in Vermilion, Alta. The facility is owned and operated by husband and wife duo Lorena and Mike Donkin. Having joined the facility as an employee in 1992, Mike moved on to managing it and then took over as its owner in 2010. Lorena officially became a part of the collision repair centre after the retirement of its front office administrator.

“When we were looking at our options in joining networks, CARSTAR really was the only one we ever considered because we just liked what they offered,” says Lorena. “It was nice for us because we took on the facility from a wonderful family. It is quickly becoming a family business for us as well and CARSTAR happily supports that.”

Keeping up with the family tradition, the couple’s sons Brandel and Karsten have already begun participating in the business. Brandel is currently a part of the registered apprenticeship program offered at CARSTAR Vermilion while Karsten shows a keen interest in cars. Spread out over 539 sq m (5,800 sq ft), the collision repair facility is equipped to handle repairs of all makes and models. The shop is currently aluminum ready and plans to earn certifications in the near future.

“Families like the Donkin’s do not necessarily want to sell their business, but need to adapt to the changing industry climate,” says Mike Piper, Western zone Director, CARSTAR. “Being a part of a network like CARSTAR allows repairers to own and operate their business locally, but with that added support of a network who provide the resources needed to keep them competitive in their community.”

Lorena and Mike plan to continue lending their support towards initiatives within their community, such as sponsoring local curling clubs, hockey and baseball teams as well as fundraising for their church. Additionally, they also wish to help raise funds and awareness for CARSTAR’s charity of choice Cystic Fibrosis Canada.