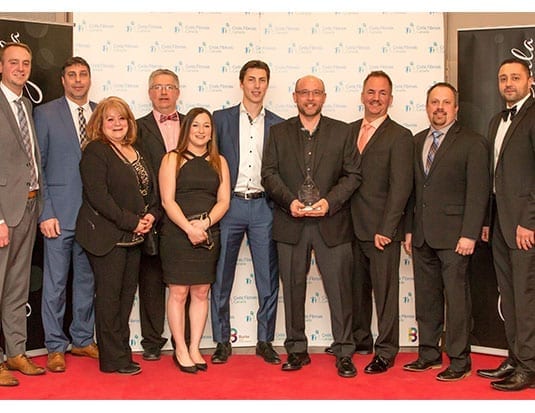 Edmonton-area CARSTAR locations demonstrated their continued commitment towards cystic fibrosis fundraising by going above and beyond at the annual Face Off with CF Gala.

Attending the gala for the 6th year in a row was honorary chair Ryan Nugent-Hopkins of the Edmonton Oilers. He was accompanied by other members of the team and alumni like Jason Strudwick.

Gala attendees were treated to a four-course meal. They also got the opportunity to meet the players and take part in both a silent as well as a live auction. CARSTAR was present as a top sponsor at the event and earned the title of being a “Shut Out Sponsor”. Most of the network’s Edmonton team attended the event to help contribute to the $126,000 raised at the event.

“Cystic Fibrosis Canada is so grateful for the continued support of CARSTAR,” said Christine Martysiewicz, Director, Corporate Partnerships, Cystic Fibrosis Canada. “With the success of the annual Face Off with CF Gala, the Edmonton-area group of CARSTAR locations reaffirmed their commitment to creating a world without cystic fibrosis. The incredible funds raised at the gala will help us continue to improve the quality of life of the 4,300 Canadians who live with CF. Thank you to CARSTAR’s Edmonton-area locations, and to the star-studded line up from the Edmonton Oilers organization, for their commitment to our cause.”

“The Edmonton-area group of CARSTAR locations have been working together to find unique ways to pool resources that would yield even larger donations to Cystic Fibrosis Canada,” said Michael Piper, CARSTAR, Zone Director. “Not only did they work together for this gala, but also are hosting their second Swing for the Cure golf tournament to help to continue raising funds for cystic fibrosis research, care and advocacy.”

The Edmonton-area CARSTAR facilities will be hosting the Swing for the Cure golf tournament on August 14th at the Quarry Golf Course. The following locations are to participate at the event:

About 20 years ago, CARSTAR took up the cause after a franchise partner’s granddaughter was diagnosed with cystic fibrosis.  CARSTAR’s commitment to cystic fibrosis and the funds raised for the same have increased ever since. CARSTAR has raised nearly $3.7 million in Canada so far and is working hard to continue accelerating its fundraising momentum in the U.S.