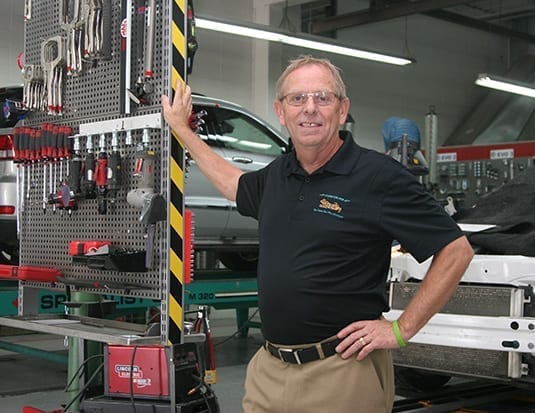 With a near 50-year career in the Collision Repair industry, Ken Friesen has both seen and achieved a tremendous amount.

Friesen started his collision industry journey back in 1970. He learned to paint cars and became an expert in fiberglass repairs, particularly Chevy Corvettes. By the end of the decade he had already owned his own business and soon after, started Concours Detailing, which became a highly successful multi-shop operation—Concours Collision Centres. An early advocate of lean principles, continuous improvement and professional development, Friesen was among the first to participate in CCIF and over the years has consistently set benchmarks in terms of shop efficiency, staff training and adapting to a changing environment. We asked him to share a little of his own experiences as well as his thoughts on some of the issues facing the industry today.

How did you first get started in this industry?

I didn’t do very well in high school, so decided to get into the auto body repair trade. I remember telling my father I was going to become a famous car painter!

You quickly developed a reputation for repairing fiberglass, can you tell us a little about that?

I was working in a shop, when a Corvette came in for repairs. Nobody wanted to fix it so I decided to put my hand up. I wasn’t even a technician at the time but I decided I would give it a go. I found I enjoyed fixing these cars and later became a fiberglass specialist.

You had your own business by the time you were 21, can you tell us a little about that?

I was working with a guy that was importing classic cars from the U.S. and fixing them up. The business only lasted a few months and I decided to buy the equipment for $5000 and change the name to Kenny’s Fiberglass.

How did you fare in those days?

Back then I thought it was just about fixing cars and I didn’t really understand the concept of running a business. About six months after I started I had to close the doors since I wasn’t making any money and was going broke. I ended up going back to work for the guy who had previously hired me and paid the money back. It was a hard lesson.

But this time, things turned out quite a bit different didn’t they?

Yes. We opened another shop, called Professional Auto Body & Fiberglass. It was very successful but as is the case sometimes, partnerships don’t always work out and in 1980 I sold out to him.

That’s when you started Concours, is that correct?

I started Concours Detailing in 1981. By that point I’d learned a lot about finance and running a business. I’d saved enough money to buy equipment and when a local body shop went out of business a year later I was able to buy a compressor and a spray booth. I changed the name to Concours Auto Body and from there it grew. We moved to a new location in 1984, doubling our size and then to another location in 1990. We later expanded to have other locations and ended up with four facilities in the Calgary area employing 70 people.

What are some of the milestones during your career that really stand out?

I think the first one was when I sold my interest in Professional and started Concours. I think another one was about 15 years ago when we made the transition toward Lean processes. Yet another was opening the Royal Oak location, which was purpose built and designed around Lean Principles. Being inducted into the Hall of Eagles was also another event that really stands out. I feel particularly proud about that because it was recognition from my peers for contributions I’d made to the industry. When anybody gets recognized, it’s huge deal.

You’ve been a big advocate of lifelong learning and being part of performance groups, can you tell us a little about that?

I never received anything more than a 12-grade formal education but that hasn’t stopped me from learning. I’ve always been a keen reader and made the effort to get out from my business to learn and improve. I think that is so important. Too many of us feel we are too busy fixing cars to step away and learn. I was a founding member of a Coyote group and that is what really got me started on the road to continuous improvement and new processes. It was also what got me tuned into Lean Principles. The benefits have been tremendous.

What, in your view have been some of the biggest changes in the industry?

Things always change and move forward and you need to know how to deal with them and keep moving. Some of the biggest changes have been the way cars are designed and engineered, the evolution in paint and refinish technology and the way the repair process has evolved.

Can you tell us a little about how you feel the repair process has evolved?

The advent of Direct Repair Programs was a big game changer. Before that, you had to negotiate with the appraiser on every little thing. Now, you fix the car and you send the bill but there are still issues, such as getting some insurers to pay for certain procedures, particularly pre and post scans on vehicles. As an industry, we simply can’t afford to not have vehicles repaired properly. If a car isn’t fixed properly and something fails, somebody’s life could be at stake. It was because of issues like this that I wanted to see a CCIF established more than 20 years ago.

What do you think are some of the key challenges facing the industry?

I still feel shops getting paid for the required repairs is still a work in progress but so is finding people to do the work properly. There is a huge shortage of technicians in our industry and today, you really need people who understand how to fix modern vehicles. The way in which we allocate the repairs is another. Often, we have techs working on flat rate who are responsible for the car. They take it apart and put it back together, essentially “owning” the car while it is being repaired. At our shops we developed a process for passing the car off and building teams to work on each vehicle, instead of assigning it to a single tech. And instead of flat rate, the team model uses a different pay structure where you have a really qualified, progressive technician that leads the team and can support and educate those that work with them. That way everybody benefits and you end up with a much more profitable shop. Today, these vehicles are so complex that you simply can’t have one tech that will understand how to fix the entire car.

With so much consolidation having taken place in the industry do you feel there is still a place for independent shops?

Yes, particularly in smaller communities. If you are in a small town, and you support the community and advertise your services everywhere and you know people, they are more likely to come to you than a consolidator who decides to set up in your town. Word of mouth is still very, very powerful and as long as you’re able to do good work you can still be successful.

What are your thoughts on accreditation and certification that’s become increasingly prevalent in the industry?

I think that accreditation, like the CCIAP’s program really is the benchmark for repair standards. If you’re not able to meet the criteria, then you really shouldn’t be in business. As for the OEM Certifications, I look at those really as a business strategy. Aligning yourself with OEMs can be a very good strategy, particularly if you are an independent shop. I look at our industry as a lot like the medical profession. Today, you need specialist skills and knowledge to be able to repair these vehicles and aligning yourself with OEMs is an effective way to do that, plus it adds credibility from a customer and branding standpoint. There are many options open to shops today, whether it’s becoming part of a banner, joining a franchise network, or remaining independent and seeing certification as a business strategy.

Where do you see the industry heading in the future?

There will likely be fewer shops and they will likely become more specialized. We will need bright, young and highly skilled people that really understand the technology that is becoming an integral part of our industry. We also need people who are willing to stand up for the best interests of the industry when it comes to issues such as KPIs, severity, equipment and training. I feel that there is a tendency for us to sometimes ignore these issues but they continue to simmer away beneath the surface. We will reach a boiling point unless we really take steps to tackle them.