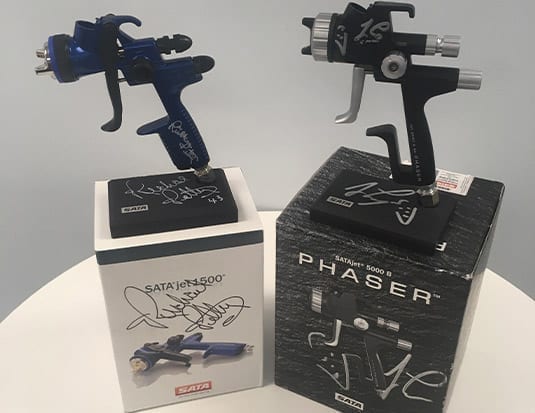 Conducting the charity auction for the second year in a row, the company offered a SATAjet 5000 B PHASER signed by Jay Leno to the highest bidder. Additionally, it also held a raffle, offering a SATAjet 1500 B signed by NASCAR legend Richard Petty to the winning participant.

All proceeds from the auction of the PHASER and the raffle of the SATAjet 1500 B go to The ABLE Network, an autism charity. SATA Canada was able to raise over $4,000 at CCIF on January 24.

John Turner, General Manager at SATA Canada, successfully convinced comedian, late night TV host and noted car collector Jay Leno at SEMA 2018 to be a part of this charity program.  Having worked with autism charities since the mid-eighties, Leno’s interest was captured when informed about the charity recipient.

The ABLE Network is a community-based program that provides relevant inclusive work and recreation opportunities for young adults with intellectual disabilities in natural job and community settings. Further details about the program can be found in their website: The Able Network.

Doug Roberts and his daughter Kim from Fix Auto, Barrie North, placed the winning bid for the PHASER gun. Tyler Zacher-King, Director of Ontario Sales, AB Warehouse was the lucky winner of the raffle. Zacher-King graciously offered up his prize for auction to raise more money. Daryll O’Keefe, General Manager, Fix Automotive Network, Ontario, placed the highest bid for the SATAjet 1500B, keeping both the guns in the Fix Auto family.