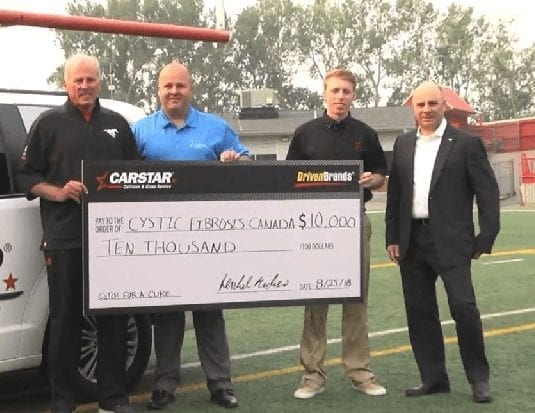 CARSTAR recently celebrated its third annual Catch for a Cure campaign, in partnership with the Calgary Stampeders.

This year, the campaign raised $10,000 for Cystic Fibrosis Canada.

“Cystic Fibrosis Canada has been the CARSTAR charity of choice for over 20 years and we are grateful to continue our contributions to this cause with the support of valued partners like the Calgary Stampeders.” said Michael Macaluso, President, CARSTAR. “This year’s contribution was made extra special as the Calgary Stampeders were able to win the Grey Cup exciting the whole Calgary community, including our franchise partners.”

CARSTAR Calgary franchise partners have had a lot to celebrate this year as they hosted one of the networks most successful North American conferences of the year, winning the CFL championship and raising valuable funds for their charity of choice.