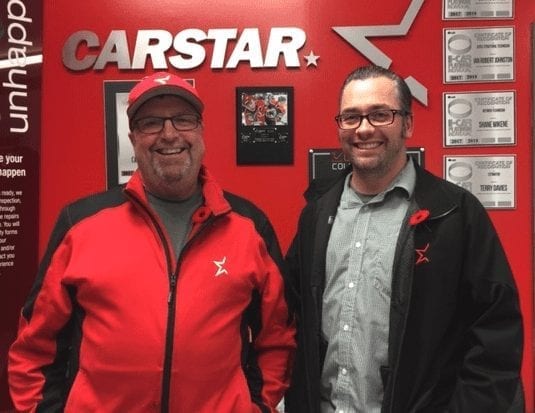 CARSTAR has announced its first MSO in British Columbia.

Ryan Isherwood, owner of CARSTAR Duncan (Isherwood) since 2012, has added CARSTAR Courtenay to his portfolio, making him the first CARSTAR multi-storeowner in British Columbia.

Isherwood celebrate this achievement alongside former CARSTAR Courtenay owners Faye and Terry Davies who have now earned a well-deserved retirement.

“When I started my own business back in 2009, I quickly realized I needed every ounce of support I could get, making my initial decision to join CARSTAR a no-brainer,” said Isherwood. “Having the opportunity now to expand my operations, especially with such a wonderful store that is staffed with an outstanding team, is an exciting milestone that I am happy to celebrate within the CARSTAR family.”

Ryan Isherwood is not the only motivated CARSTAR franchise partner in British Columbia driving change.

Additionally, the group also raised another $6500 at the annual CARSTAR North American conference, motivating other regions to create partnered contributions.

CARSTAR’s British Columbia stores have also demonstrated their ongoing commitment to education with participating locations completing a total of 150 hours of online training through CARSTAR University.

“The energy permeating from the CARSTAR team in this region cannot be overstated, as they continue to conquer milestones and build a foundation for future successes,” said Michael Macaluso, President, CARSTAR. “The diligent team and system in B.C., coupled with the passionate network of franchise partners in the region, have truly generated unprecedented momentum making the CARSTAR network a force on the West Coast.”