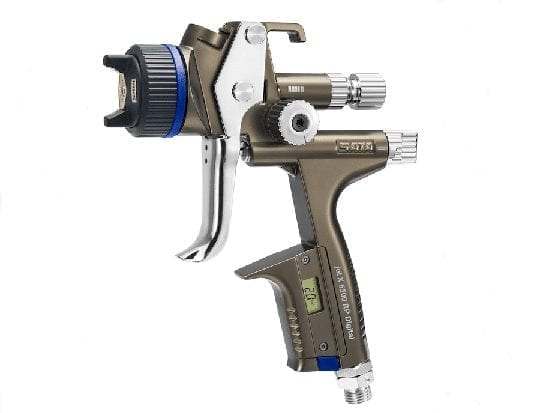 SATA revealed its latest SATAjet X 5500 to the North American market for the first time at the 2018 SEMA Show now on in Las Vegas.

First seen at the Automechanika Show in Frankfurt, Germany, back in September, the SATAjet X 5500 features a new X-nozzle system conceived to establish the application standard for the future.

This nozzle system builds on the formula established by the HVLP and RP concepts (each of which remain available), but also provides the additional choice between “I” and “O”-nozzle sets.

In line with the increasing nozzle sizes within each of the respective technologies (HVLP/RP), the material flow rate increases with constant increments so that the spray fan size and width are unchanged across the entire nozzle spectrum. End-users can now rely on a transparent and consistent system which offers them clear and well-structured application options.

The “I”-nozzles produce a parallel spray fan pattern with a minimal dry zone and a drier centre which is ideal for painters preferring a reduced application speed and maximum application control during the painting process. The film build per coat in comparison to an “O”-nozzle of the same size is slightly reduced.

The “O”-nozzles have an oval-shaped spray fan pattern with a larger dry zone and a wet core to accommodate increased application speed at the expense of slightly less application control during the painting process. The film build per coat in comparison to an “I”-nozzle is slightly higher.

The SATAjet X 5500 is designed to give auto refinish technicians from every market environment the options suited to their specific requirements. The gun’s nozzle technology is designed to offer high speed and durability, as well as the option for a soft, controlled feel.