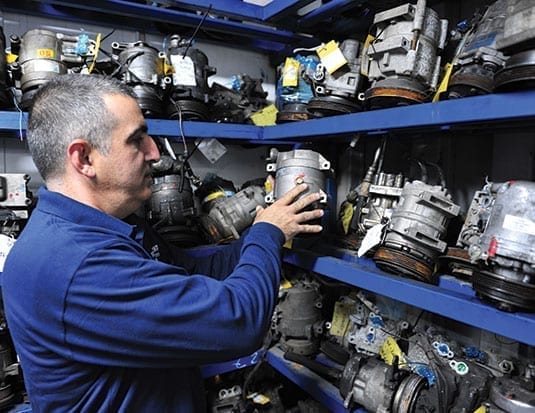 Recyclers are diversifying their revenue streams to stay competitive.

Within the last 5-10 years, there’s been a real push to diversify the revenue stream that the average recycler has. This is driven by the fact that auto recycling is an unusual industry because your inventory comes from what you buy.

The concept has long been that you need to learn how to extract more from every car so that you can afford to pay more for a broader range of cars that are available to you.

The proactive recyclers decided that instead of taking it lying down, they’re going to sharpen their pencils and make sure they’ve got the right level of overhead to buy that car. Then, once a recycler has the car, the more revenue they can pull per vehicle and the more profitability options they’ll have.

When a member is buying a car, they look at it as a source of parts and that’s still a fundamental part of the business. But it used to be that 80 to 90 percent of the revenue extracted from a car was from parts, and that number is down to maybe 70 to 80 percent now on average—but there are some recyclers below 50 percent.

Some argue that part sales are dropping as a percentage of total revenue because parts are so much more complex now and there isn’t as much interchange as there used to be. It’s a harder game to sell parts, so recovering more materials and cores allows recyclers to diversify their revenue stream.

A core is a part recovered for rebuilding rather than direct reuse. We used to recover 15 to 20 part types, but now that has grown to 75 to 100 part types. There are probably five or six serious data-driven core buyers, so now recyclers talk about having an organized core program in terms of buying a car based on its potential core value.

Crushing what’s left after the parts from a car are recovered—the materials, including metals like steel, aluminum and copper have value but they can fluctuate in price depending on the market.

Members are much more in tune to smaller quantities of metals that can be taken out of a car. They’re trying to determine, for example, where the aluminum is in a car—if the car has an aluminum engine or rims. Some are also pulling the wiring harness and if you get enough of that, you can sell it to somebody who will chop it up for the copper that’s in the wires, or buy the specialized equipment yourself.

There are a lot of recyclers moving into the installation end of things because if you’re installinghigh-value items like engines and transmissions, you want to ensure they’re installed properly. They’re also offering new services to their customers like warranties, and selling new items like tires and OEM overruns, which means hiring more staff to service the retail customers.

The guys that are just parts, parts, parts, are dealing with such tremendous competition that it’s proving tough to stay afloat. The ones who have a real integrated approach—i.e. it’s not all parts it’s not all materials, it’s making sure you’ve got the right balance—are the ones succeeding. They’re playing the big trends and staying agile by not putting everything into one revenue stream.