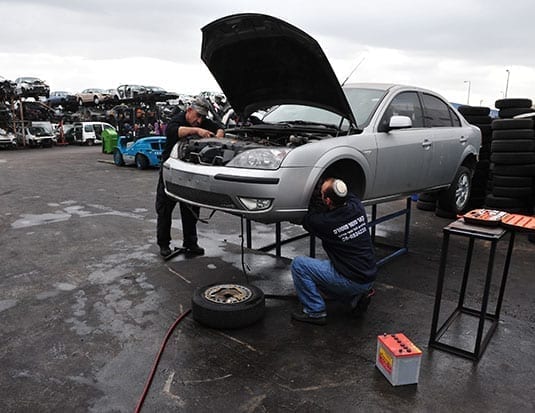 OEMs want an off-ramp on the Circular Economy.

For the longest time, auto recyclers have coexisted with manufacturers. But now, we are facing challenges with OEMs and their hot and cold views of our industry.

Auto recyclers are an integral part of the circular economy and end-of-life vehicle management. OEMs understand what recyclers do: we take end-of-life vehicles and break them down for materials and parts. We then sell the materials and try to sell the parts, but that’s becoming more difficult because OEMs are ramping up marketing efforts that portray recycled parts as being inferior.

Previously, these efforts were directed at the offshore aftermarket, which often includes counterfeit parts. From a safety standpoint, recyclers agree—OEM parts are always going to have a better fit for the vehicle they’re engineered for.

But now that message has been broadened to emphasize that anything that isn’t brand new is a problem just waiting to happen—and these scare tactics are having an impact on the industry.

In reality, recycled parts are OEM parts, and we’re taking them off the vehicles they were built for. It could be a six-month-old part with the same fit, function and safety parameters, but for reasons of economics and maintaining their market share, OEMs would rather refer to recyclers as junkyards—as in, you wouldn’t put a piece of junk on your car, even though it’s their own part.

The technology of cars is evolving, and OEMs are almost shooting themselves in the foot with the level of complexity—where’s the repair industry going to go?

When recycled parts don’t seem like an option, you can total a car pretty quickly. For example, bumper covers used to cost around $400 and you could get them from aftermarket suppliers for half that cost. Now, some bumper covers are $4000 because of sensors, cameras and computer components. It doesn’t take much of a fender bender to write the whole thing off and then everyone loses, except for the manufacturer, because they’ll be selling a new car.

So, repairers are starting to get nervous. While they’re getting better information from the manufacturers and it’s easier to order parts, they’re also seeing record levels of write-offs, total losses and vehicles not being repaired because it’s getting so expensive.

On the one hand, OEMs wrap themselves around the environmental benefits of the circular economy and how they build these cars so they’re good for the environment at end-of-life. But to them, end-of-life means press it and don’t use the parts, just have somebody do the dirty depollution work and recover those materials. But the circular economy is not just about recycling—reusing and repurposing are essential.

Supporting the circular economy and pushing the idea that recycled parts are inferior are two ideas that don’t match up, and this is something that’s not going to get simpler.

It’s a pretty challenging spot that we’re in, and the repair and insurance industries also see it as a problem. We need to be talking about this issue as an overall sector and not just what benefits one sector over the others.