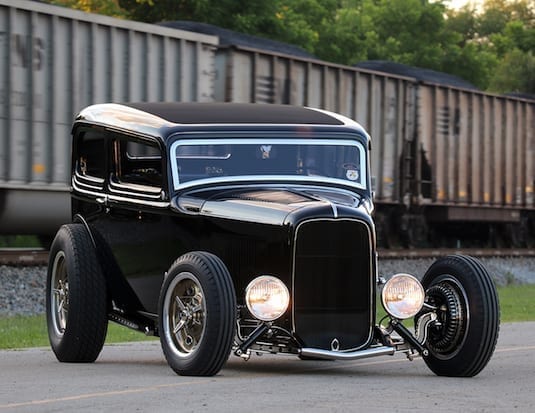 Cars and trucks painted with PPG products captured an array of prestigious awards at the recent SEMA Show held at the Las Vegas Convention Center.

The annual show attracts automotive industry professionals from around the world, and this year more than 100,000 visitors were treated to displays of custom-built vehicles exhibiting the latest trends in hot colors and advanced finishes. The wins affirmed PPG’s leadership position as the custom car world’s top choice in automotive refinish products.

Andy Leach and his team at Cal Auto Creations, Bennington, Neb., picked up the 2017 Mothers Polish Shine Award for a 1930 Ford Model A coupe painted by Charley Hutton at his Charley Hutton Color Studio in Nampa, Idaho. Charley gave the car, named “After Thought,” its “Paleozoic Sea Blue” finish using ENVIROBASE High Performance waterborne basecoat. Accent colors included Pepper Grey on the engine and chassis, “After Thought Gold” on the wheels and Titanium on the blower. Global Refinish System D8152 Performance + Glamour Clearcoat was used on the body and D8115 Matte Clearcoat on the satin colours.

The Roadster Shop, Mundelein, Ill., received the GM People’s Choice Design award for the “AXIS” Camaro. It was also a finalist in the Battle of the Builders.

“Once again, PPG has helped custom car enthusiasts raise the bar of ingenuity,” said Bill Shaw, PPG Director,Refinish Marketing, Automotive Refinish. “Some of the most talented painters and builders in the business unleashed their imaginations and showed SEMA attendees the creative heights that PPG’s refinish products allowed them to reach. The painters have the vision; we provide the means and the awards follow. We are extremely proud of their achievements.”