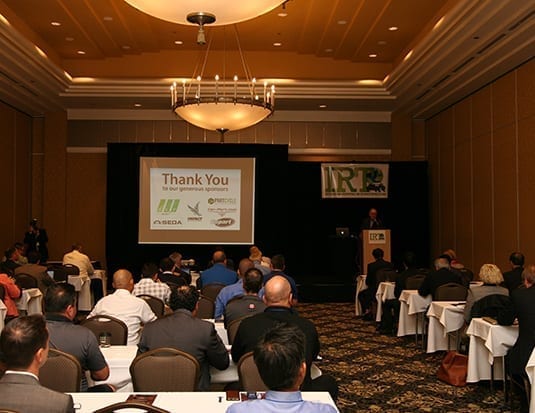 Recently, Canada co-hosted the 9th Auto Recycling International Round Table in Niagara Falls with our American colleagues, the Automotive Recyclers Association. It’s the second time we’ve hosted the IRT since 2007 in Quebec City, and the meeting happens every 16 to 18 months or so.

We had attendees not only from Canada and the U.S., but other countries like Australia, India, Japan and the United Kingdom.

This particular meeting is highly focused around country reports, where major international associations tell us what’s going on in their countries that other countries or other organizations should know about.

The IRT is extremely beneficial because it helps us tackle issues and see opportunities on a global scale, and we often learn a great deal from each other. Even attending such a large-scale event elevates us as individual organizations, because other industry groups, like manufacturers, can see we’re not just looking at small-picture, regional issues but are tapped into international networks.

The current major topic streams revolve around the Kushiro Declaration, which is a document we created during IRT presentations in Japan a few years ago. After the country reports, we sat down for half a day to discuss the situations that— regardless of where one is located—we all experience, whether it’s an opportunity or it’s a challenge.

The Declaration consists of several different items and we’re trying to align speakers to each of these foundational pillars for what the IRT is all about – certification, environmental standards and best practice, public awareness, government engagement, manufacturers support, auto recycling industry stewardship, education and training, and research information sharing.

Various member countries have taken the lead on these pillars. For example, one is certification, so Australia is moving forward with a national certification program that they’ve borrowed heavily from ARC and from ARA through the IRT.

As host, we show the world what we’re doing in Canada. On the first day, ARC and ARA met to discuss what each organization is doing on a North American level, a meeting that was designed to blend right into the IRT.

We’ve also had two facility tours on Wednesday with Thorold Auto Parts and Miller’s Auto Recycling. At the time of our visit, both facilities had just finished some major upgrades and expansions. They represent very modern, forward-thinking auto recyclers.

On Friday, reviewed the Kushiro document and determined which new opportunities have come up and what needed to be identified as a priority. We will also established a blueprint for what we’re doing as an IRT, where the IRT is going next, and whether we need to reexamine when we’re doing it or how we’re doing it.

This year, the IRT exceeded expectations for the events, content and people in attendance. We had many local members ask if they should attend, and while we cautioned them that they would not walk away and implement something immediately that enabled them to sell more parts, we did stress that meetings like this serve as eyes to different roads businesses can go down and ways the industry can take shape. With meetings like the IRT, there is so much we can all learn from each other.