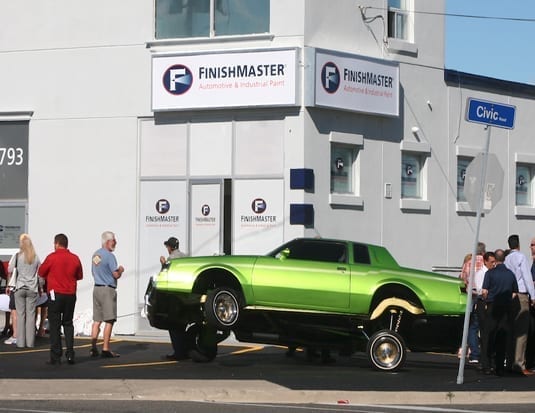 As part of the 19th annual Open House event, a tradition carried on from the previous owner, Vancouver Autocolor, the three stores celebrated their inaugural launch under their new FinishMaster Canada banner.

Regional representatives from FinishMaster Canada were on hand to introduce themselves to those at the event. Each guest was welcomed with a FinishMaster branded baseball cap and stainless steel mug. Many suppliers were present to exhibit their paint lines and related products.

A door prize draw for a paddleboard from PPG Industries, as well as food and beverages, were offered in the evening to make each event memorable. “All these fun initiatives created three enjoyable and informative evenings for everyone” said Lorne Henrikson, Regional Sales Manager, Western Canada, FinishMaster Canada.

Following the initial deployment phase of FinishMaster Canada in Toronto and Ottawa last fall, these three inaugural launches introduced the FinishMaster brand to Western Canada with a presence in the Greater Vancouver Area and South Vancouver Island markets.

“It was FinishMaster’s big launch in the Vancouver region, so we wanted to do it right to make sure we were properly presented to the market there. We are delighted to extend and improve our Canadian FinishMaster family with their expertise,” said Michel Charbonneau, Vice President, Sales & Marketing, PBE division, Canadian Automotive Group.