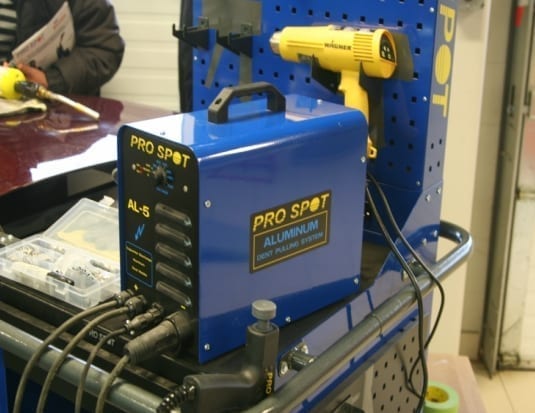 A new, healthier way to work.

The latest trends in collision repair go beyond shiny tools and equipment, focusing rather on cleanliness and health.

That’s one of the reasons why dust extraction has become a buzzword. “In Europe, dust extraction is mandatory for a lot of shops,” says Jalbert. “Not only is it better for health, but it also cuts down on consumables.” 3M has developed a dust extraction system with Festool, known as the Total Automotive Sanding System.

“The system includes our abrasives,” notes Jalbert. “There’s also an organization station, where you can put your products, along with a Festool unit. So now it’s a working station, as opposed to a dust extraction system.”

And as OEMs take a more active role in mandating equipment, Jalbert believes there will continue to be innovation. “As they’re making cars lighter, it’s changing the substrates that they put in vehicles, so it’s changing how technicians work,” he says. “Shops need to stay on top of things, certification is going to be important. You need to know how to fix all different OEMs if you want to stay in the game with insurers— they all require different tools and technologies for their vehicles.”

“This is going to become a more skill driven industry, as technicians have to learn how to fix different vehicles.” — Craig Jalbert, Marketing Manager, 3M Collision Repair

Some OEMs are running audits to ensure shops know what they’re doing. “They’re raising the bar,” says Bill Davidge, National Technical Manager, CARSTAR. “A third party will come in and make sure a shop knows how to use the specified equipment.”

That’s why it’s important that shops watch the industry closely to see what’s going on. “Watch what the OEMs are doing, get a good understanding of certification programs so you know what you’re getting into,” Davidge advises.

He also believes efficiencies can be improved by purchasing quality products. “There’s a difference between a twenty dollar package of sandpaper and a forty dollar package,” says Davidge. “In the end, the more expensive package will really be less expensive because of the quality. Don’t look at saving a few dollars, because you may be killing the efficiency of the technician by using a low quality product.”

That even applies to dent pulling stations. “You can buy a dent station for $7,000 or $30,000,” Davidge says. “You have to look at what kind of vehicles you’re working on. If you’re not working on aluminum vehicles, there might be better places to invest your money. But if you’re repairing F-150s, you should invest in a decent pulling station.”

At Mirka, president John Booth has noticed a few trends with sanders. “Shops are now using products that are used with vacuums,” he says. “Sanding disks that have the capacity to be used with vacuums are becoming very popular.”

Another trend that has crossed the pond from Europe is the electric sander. “In Europe, it’s been very common to use electric sanders,” Booth says. “They’re much more efficient. In a market like Ontario, we’re dealing with extremely high costs for electricity. You can plug an electric sander into a wall socket on 110 volts, and it will literally run on 4,000 or 6,000 watts, depending on the sander. It make a huge difference compared to running a 15 horsepower 220 volt electricity eating machine.”

“Electric sanders are also much quieter. New shops are requesting them, and some older shops are converting.”

Mirka also provides work cart systems for shops. “We have different systems that are all inclusive, that allow the operator or technician to have everything by them as they’re working,” Booth explains. “That reduces the travelling time across the shop to get a piece of sandpaper, since everything is right at hand. They have their vacuum on the cart, all their tools, abrasives, right there when they need it.”

The vacuum unit is plugged in so that as soon as the sander is turned on, the vacuum turns on. “The vacuum only runs when the sander is running, so it’s extremely efficient,” says Booth. “They’re capturing the dust at the source of sanding, so they’re not only making the shop cleaner, but also the air. Clean air, clean working environment, and a healthier employee.”

The Mirka Optimized Surface Preparation system allows shops to standardize processes across their networks. “You can take a person from one shop and take them to another shop, and they’ll already understand what to do,” says Booth. “It makes training very easy.”

He also finds that the OEMs are getting more involved in the repair process. “In Europe, and even in the United States, the OEs will own their own shops,” says Booth. He doubts that could ever be the case in Canada. “We’ve got 36 million people very spread out in Canada,” Booth observes. “They’d have to drive a long way to get their vehicle repaired, and most people would rather have that done locally.”

It’s not just the OEMs that are making demands of the collision repair industry— in many cases; government insurers are taking a stand. “We see Manitoba Public Insurance (MPI) taking a greater interest in what shops they’re going to approve, based on the equipment,” says Art Ewing, Canadian Sales and Marketing Director, ProSpot International. “MPI is telling shops if you want to continue to get our work, then this is the equipment we require. Saskatchewan Government Insurance (SGI) Saskatchewan is also taking a similar role.”

It’s a challenge for equipment manufacturers. “We need to be able to meet what the OEMs, government insurers, private insurers and various certification programs are asking,” says Ewing. ”We’re continually going through our R & D and developing the latest equipment.”

“Within the aluminum program, we can provide shops with tools that are multi-faceted and can be used with much more than they were originally designed for.”

ProSpot developed a portable dustless sanding system designed to be used for aluminum that works with compressed air. “It’s very portable, we call it grab and go,” says Ewing. “Since it only weighs about 14 pounds, it can be taken anywhere.”

Overall, Ewing believes the increased involvement of the OEMs is positive. “They’re giving us the proper repair procedures, and that means the person whose car is being worked on will be assured their car will be properly repaired. It’s pushing shops to upgrade, and demanding that techs be cognizant of these new materials.”

“Everyone has to step up their game.”