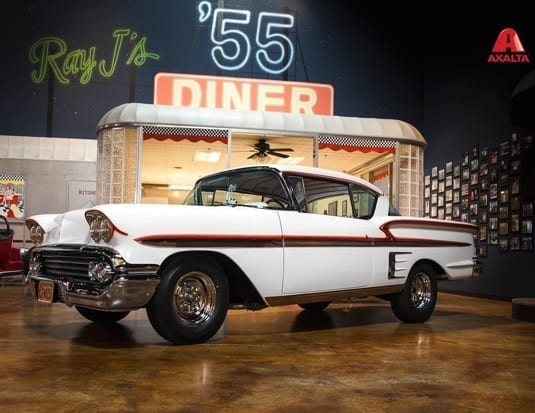 The Impala was displayed at Axalta’s exhibit space during the NHRA Hot Rod Reunion in Bowling Green, Kentucky on June 15-17 and will also be on display at the Goodguys Columbus in Columbus, Ohio on July 7-9, and NSRA Nationals in Louisville, Kentucky on August 3-6, 2017.

For Evernham, the 1958 Impala and the movie, American Graffiti, inspired his life-long passion for American car culture. After pursuing this iconic car for most of his adult life, Evernham finally acquired it from the gentleman who purchased the car directly from Lucasfilm after the movie was produced in 1972. Upon arriving at his shop, it was clear the car needed work to protect it from deteriorating.

Evernham and his team set out to preserve the car and restore it to the exact specifications as it appeared in the film. When it came time to restore the most visible part of the car, the finish, Evernham turned to Axalta. With the help of Axalta’s colour experts and Cromax refinish products, the vehicle’s finish was completely restored to its original paint scheme, including the iconic hand-painted red striping.

“The paint was more than 40 years old and hadn’t been maintained. If it was left unprotected for much longer, the car would have just been bare metal,” said Evernham. “My long-standing relationship with Axalta allowed me to call on the industry’s best paint experts to evaluate the car, get recommendations and subsequently, restore a vehicle that was originally coated in obsolete lacquer material. Axalta’s colour match ability played a primary role in making the car look just as it did in the movie.”