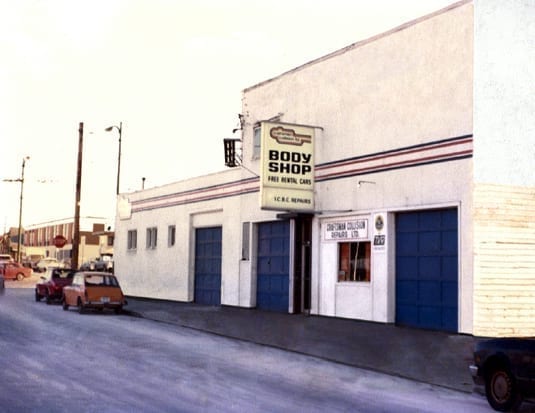 After 40 years and literally millions of customers, body-shop chain Craftsman Collision has certainly had its share of weird and wonderful moments.

Since opening on Vancouver’s Cambie Street in 1977, Craftsman has experienced everything from fires to a missing promotional blimp to even—a cheetah.

That’s right, a cheetah. For whatever reason, a customer who performed as an exotic dancer with her pet cheetah allowed the wildcat to take up residence in one of Craftsman’s customer replacement vehicles (formerly known as ‘courtesy cars’)—turning a formerly pristine interior into a tangled mess of fabric, foam, and wires garnished with the ineffable aroma of feral sweat and excrement.

As you might expect from a body-shop chain marked by consistent and successful expansion to 40 locations in three countries (including China), Craftsman is generally a very buttoned-down operation. So it was genuine news, one windy day in 2006, when Craftsman’s advertising blimp was found missing from its Maple Ridge shop on Lougheed Highway. Arriving to open in the morning, the shop manager was aghast to see half of a frayed rope where the 20-foot, helium-filled behemoth had been anchored. Craftsman head office immediately issued a press release offering $1000 reward for its safe return, but despite widespread exposure in the major papers and on the 6:00 TV news that night, the blimp was never found, and the reward never claimed.

Expecting the unexpected is part of what keeps collision repair interesting to Founder and President Hatswell, even after 40 years. And it must be said that today’s customers expect a much loftier level of service than was the norm 40 years ago—thanks in large part to Hatswell’s pioneering efforts. He is widely recognized in Western Canada for taking the industry from rag-tag storefronts thick with cigarette smoke to the clean, friendly, shirt-and-tie environments that are pretty much the norm in the best bodyshops today.

Today, Craftsman employs more than 600 staff under the banners of Craftsman Collision and Distinctive Auto Works, managed by professionals and tooled with equipment that would have seemed like science fiction 40 years ago, from antistatic surface preparation devices to and heated-nitrogen spray painting and computer-guided frame straightening systems. Most employees participate in a generous array of company-sponsored social events: annual boat cruises, golf tournaments, ski trips, family days and gala Christmas parties at premium venues.

Craftsman’s success has trickled down to the community at large, with more than $2 million in donations to dozens of charitable causes through the years. Among the most prominent are the Salvation Army (whose food bank is replenished by Craftsman’s annual Making a Dent food drive), the Heart & Stroke Foundation, the BCIT Foundation and School of Transportation, the Juvenile Diabetes Research Foundation, the Vancouver Symphony, and the Lions Gate Hospital Foundation, to which Craftsman has donated more than $1 million and helped create the hospital’s Craftsman Collision Cast Clinic.

“Creating a successful business and building stronger communities go hand in hand,” said Stacey Cook, Marketing Manager for the Craftsman Group of Companies. “Our corporate charitable ventures are often paralleled by our shop managers also getting involved in charities, sports or volunteer efforts in their local communities. Giving back is as important to us as financial growth.”

Notwithstanding the many speed bumps, early struggles with ICBC, two fires, sluggish economic times, as well as expansion hiccups and other temporary setbacks, Bill Hatswell says he has enjoyed every moment.

“I could write a book on the many things that have happened in the last 40 years,” said Hatswell. “Sad things, exciting things, disappointments, and fun. They are all part of the Craftsman success story and have helped us make our mark, making Craftsman a household name, and creating the great working environment we enjoy today. But with our continuing rapid growth, expansion into new markets, acquisitions, real estate developments and other successful ventures, it would be a bit premature. The book is still being written.”