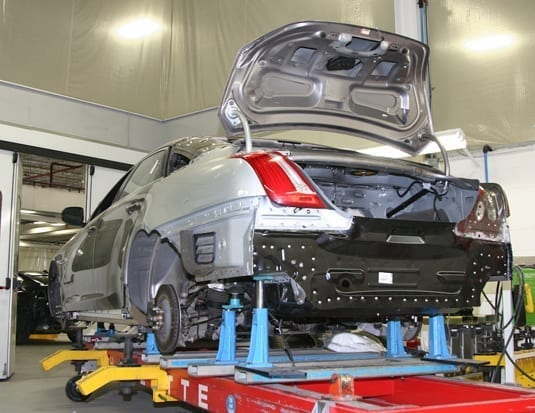 Special materials are making a very significant impact on both estimating and potentially, premiums.

When a consumer looks to buy a new vehicle, there are often a number of factors they consider. These include size, practicality, fuel economy, running costs, sticker price and insurance.

If two vehicles are priced similar and pack features that more or less match each other, yet one has a significantly higher insurance premium due to perceived theft risk or repair costs, the consumer will nearly always tend to pick the one with the lower rate.

We talked about the growth in new substrates used for vehicle construction, driven largely by Corporate Average Fuel Economy (CAFE) standards. Littooy’s own research on special materials has revealed that weight savings can be very significant. For example, using high strength instead of mild steel can result in weight savings of 10-28 percent, while going to materials such as aluminum can reduce mass between 30 and 60 percent. Use materials like magnesium and the weight savings can be as much as 70 percent.

It’s no wonder that Ford Motor Company chose to use military grade aluminum for the current F-150’s body structure (over 318 kg /700 lbs in weight savings).

Yet with all the emphasis on technology and reducing weight at the OEM level, the side effects of doing so are becoming readily apparent for collision repairers.

Research shows that claims related to vehicles using special materials in their construction as a percentage of overall collisions has risen from about 3 to 19 percent over the last five years.

And as the percentage of claims involving special materials has risen, so has severity related to those claims. Currently, severity is around 17.5 percent for special material vehicle repairs—a significant number by all accounts.

If current CAFE standards remain in force, with automakers required to achieve a fleet wide fuel economy average of 4.3L/100 km (54.5 miles per gallon U.S.) special material usage will continue to increase, since automakers presently deem it as about the only really effective solution that can substantially reduce vehicle weight.

During our conversation, this brought up an interesting point. Because specific repair procedures, tools and expertise are required to repair vehicles using special materials—examples include using special aluminum rooms and tools, rivet bonding (since a number of OEMs don’t think shops can actually replicate the factory welds), plus replacing parts and sections instead of actually fixing them—severity is likely to increase.

This could, for many consumers, particularly in the current era of stagnant wages and economic uncertainty, put the brakes on a new car purchase. And as I wrap up this particular post, here’s a little history food for thought.

Back in the early 1970s, rising insurance premiums were a significant factor in sounding the death knell for American supercars (or muscle cars) as we know them today. These large engine, youth oriented factory hot rods, grew to prominence in the late 1960s, as Detroit automakers sought to out do each other on the street and race track. The trouble was, while the cars themselves were relatively affordable, insuring them became increasingly difficult, particularly for the cars’ target audience of young males due to accidents and perceived risk factors.

As a result, such high premiums, drove many buyers out of the market and by 1976, this factor, along with emissions regulations had essentially killed the muscle car market. There is a danger that if cars become too costly to repair, there’s a possibility that some insurers might raise premiums to the point that it will make business very challenging for the OEMs and that in turn could have a significant impact on the entire automotive supply chain as well as economies of major auto manufacturing nations including the U.S. and Canada.