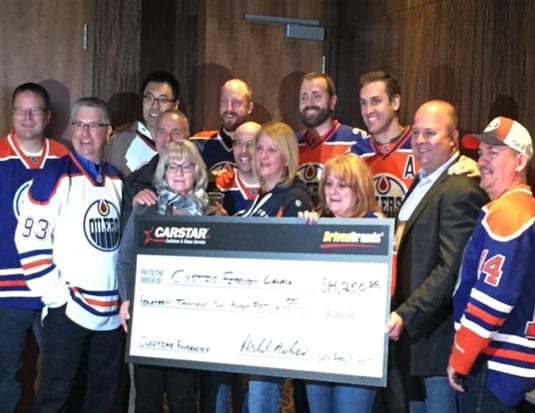 On April 9, 2017, CARSTAR Canada and the Edmonton Oilers Community Foundation presented their $14,250 donation to Brandon Newell of Cystic Fibrosis Canada.

“This initiative was a fantastic way to cheer on our favourite hockey team, while also raising money and awareness for cystic fibrosis,” said Darryl Hemstreet, CARSTAR Red Deer. “Cheering on the Oilers became that much more exciting when it went into overtime, because we knew valuable contributions were being made to Cystic Fibrosis Canada.”

CARSTAR donated $500 for every overtime game played by the Oilers for the season and was matched by $250 from the Oilers Foundation. The overtime donation commitment continued into the playoffs, but sadly ended on May 10 in the Oilers loss to the Ducks.

“We’re so grateful that the Edmonton Oilers team never gave up hope, pushing many games into overtime,” said Brandon Newell, Cystic Fibrosis Canada. “This is what families do when someone they love is affected by cystic fibrosis, they never give up hope and strive to beat the odds.”

The charitable donation from both CARSTAR and the Edmonton Oilers Foundation will go towards supporting vital research care and advocacy efforts in the battle against cystic fibrosis.

In an official statement, CARSTAR extended a special thank you to its Northern Alberta franchise partners for their considerable support.