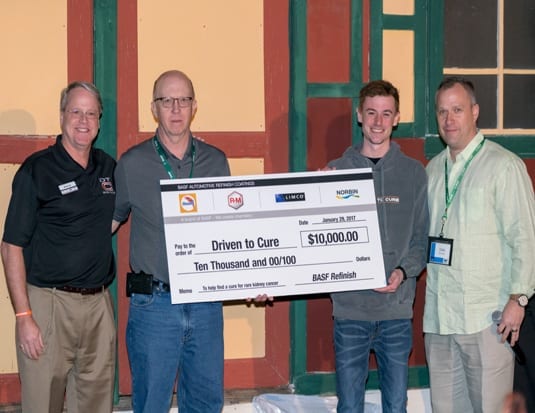 At its automotive refinish team meeting earlier this month, BASF presented Andrew Lee, President & CEO of Driven to Cure (DTC), and his father Bruce Lee, Chairman, Treasurer & Secretary of DTC, with a cheque for $10,000. Immediately following, BASF announced its new DTC Promotion, Paint with a Purpose.

Andrew Lee was diagnosed with a rare form of kidney cancer, HLRCC, in 2015 at the age of 19. With the help of his father, Lee is living his dream as the owner of a 2015 Nissan GT-R, which they rebuilt and painted orange, the color representing kidney cancer. The colour is a unique mix of BASF Glasurit basecoats, now named Glasurit DTC Orange.

Through the Paint with a Purpose promotion, the Glasurit DTC Orange is now available to order through BASF. All proceeds of the paint sales will be donated to DTC. After painting cars with the unique mix, builders are asked to send photos to [email protected] to be posted on BASF social media.

Since building the GT-R, Lee has been traveling to car shows spreading the word of kidney cancer and raising money—to date more than $200,000 has been raised.