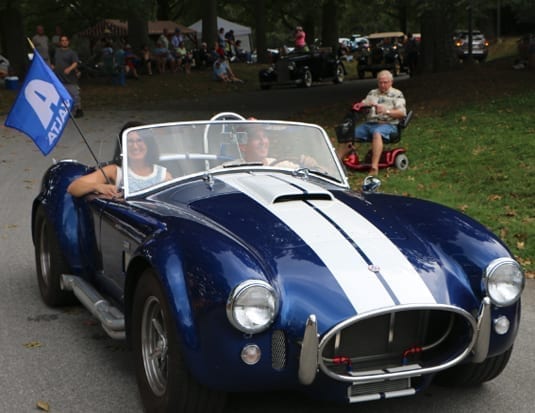 Axalta’s booth featured a pedal car and mini hoods painted in Brilliant Blue, giveaways that featured the chromatic color, and a five-foot trophy for the winner of Axalta’s “Best in Blue” award.

The car show, held in Wilmington, Del., earlier in the month hosted more than 500 automobiles including antiques, restored cars, and trucks. Many displayed an impressive use of the color blue, but the standout vehicle and “Best in Blue” winner was Dennis Whitaker’s 1965 Superformance Shelby Cobra replica from Newtown Square, Penn.

Whitaker was awarded with a trophy, a “Best in Blue” grille badge, and a replica No. 88 Axalta Chevrolet SS diecast car autographed by Dale Earnhardt Jr. The stunning vehicle, which demonstrated the boldness and vibrancy of blue, was also awarded pole position in the car show parade.

“It was a pleasant surprise to win Axalta’s Best in Blue award at the Hagley Car Show,” said Whitaker. “I am proud of my Superformance Shelby Cobra replica and it is an honor to be recognized by a leading paint supplier.”

“The Cobra is an iconic car—it’s hard to take your eyes off of it,” said Dan Benton, Axalta Color Marketing Manager. “Dennis’ Cobra was a great example of the use of blue. The energetic, vivacious and striking hue shows off the Cobra’s contours really well. The Cobra was a deserving winner of the Best in Blue award.”