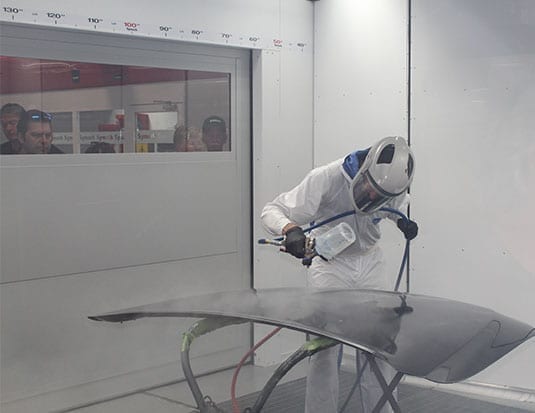 CARSTAR Fredericton North in New Brunswick, equipped with the full suite of state-of-the-art Symach equipment and systems, celebrated its grand opening on July 27.

Welcoming the community to the new facility, the CARSTAR Fredericton North team arranged a lot of fun-filled activities to celebrate the new beginning. Visitors were treated to live music played by the rock band John Maunder & The Common People. An on-site car-show for all guests, and face painting and balloon animals for children amped up the mood. Prizes were given away to the participants whose cars won at the car show. The grand opening also had a barbecue stand selling hamburgers and hotdogs, the proceeds from which were donated for Cystic Fibrosis research, CARSTAR’s charity cause of choice.

The CARSTAR Fredericton North team also put up a live painting demonstration, giving attendees a glimpse into how a Symach equipment functions.

The repair centre is the second CARSTAR location owned by Roy Kennedy, the first one being CARSTAR Fredericton which has received both I-CAR Gold Class and Certified Collision Care (CCC) recognitions.

The decision to install Symach equipment in the 10,000 square foot facility which is already I-CAR Gold and aluminum certified was an easy one, according to General Manager Steve Knox. With Kennedy being especially interested in modernizing collision repairs, there was no holding back when it came to investing in this completely modern repair centre.

“It has been incredible to work for someone who’s willing to invest this much into his business to enhance performance and ensure we are ahead of the coming industry advancements,” says Knox. “Since most collision repairers are building great shops today, it is necessary to look into new technologies and take that extra step.”

Knox began looking at Symach equipment early in 2018 for the new repair centre and even visited facilities in Toronto that have installed the equipment. The CARSTAR Fredericton North management team had a meeting with Osvaldo Bergaglio, CEO of Symach, to discuss the intentions, goals, requirements and volume for the new facility. All suggestions and plans offered by Bergaglio were eventually implemented in the facility.

The CARSTAR Fredericton North repair centre has invested in the complete line of Symach equipment that is designed to enable the shop to complete a usually three-day repair within a day. “It’s a Symach shop from the ground up. It was nice to not have to try and retrofit into an existing facility. Given that we had a clean slate, we were able to take all of their recommendations, and build them right into the building,” explains Knox. “Even our car wash is a Symach CarWash. It is a beautiful large plexiglass room that is in the middle of the facility. We usually wash cars three times during the repair cycle, so it’s fantastic to be able to take advantage of everything that Symach has to offer.”

According to a release by CARSTAR network, the value additions to this facility include the quicker drying time for paint, less downtime throughout, as well as no requirement for repair technicians to work under cars or pull frames.

“With Symach, they not only take care of the equipment but also have the complete repair process planned and installed. The Symach process helps shops streamline everything from when a vehicle first comes in for an estimate to when it is leaving the shop. They give you a way to do your work and run your business. We are really looking forward to taking their process under our roof and watching it grow because I can’t see anything but “win, win, win” coming out of this,” notes Knox.

Attractive inside and outside

Knox says that he feels excited every time he walks into the CARSTAR Fredericton facility. “It looks like an operating room in a hospital; everything is so clean, so organized and so presentable to the public. The inside of the building is more attractive than the outside and the outside of the building looks great too! Every detail of that building has been thought out, from the walls to the light fixtures, to the hoists. Everything is so ergonomic, modern and attractive. It is so different from a normal shop,” says a thrilled Knox

A major advantage of having a clean, modern facility has been a smooth hiring process. Knox had the luxury of being able to choose staff from a host of applications instead of having to accept what was available. The ergonomic design of the shop ensures that all repair work is done at chest level. This has been a blessing for the shop since people wish to work in it.

When looking to add a new location or to renovate, most collision repair shops consider purchasing a spray booth or two, one or several prep stations, adding space to do the actual repair work and even investing in aluminum repair stations. According to Les Pawlowski, Director / General Manager at Symach, Symach’s vision and method of working is a bit different. “We look into improving the overall productivity of the shop and influence each phase of repair. From when the customer arrives, to delivery, the goal of the Symach process is to determine what equipment and processes are needed to maximize that process flow, minimize labour time and minimize key-to-key time,” he explains.

Pawlowski adds that to fulfill that process, if the repair shop incorporates Symach’s designed layout and full suite of equipment, the company can help the shop maximize the productivity per square feet of available space. “We do the shop layout design and recommend the equipment based on the customer’s requirement. We review their historical shop data, their productivity, and their goals and then make suggestions and layout modifications accordingly,” says Pawlowski. He notes that the greatest advantage of using the equipment would be removing bottlenecks from various stages of the repair process.

Customizing according to the customer

Although plenty of Canadian shops are looking into what Symach has to offer, there seems to be some confusion regarding the required investment, notes Pawlowski. He explains that Symach not only offers complete solutions but also works with each customer to optimize and meet their goals and requirements. Not all body shops need to have the complete suite of products/services from day one. “Repair facilities could do staged renovations. If they are not ready to go for the complete Symach system at the beginning but would like to do it over time, that is possible as well. If they have a five-year goal to renovate, we will plan with them every step of the way. Or they could opt to invest in equipment just one time,” Pawlowski adds. Since every shop is a little different from the others, the company ultimately customizes its offering based on the needs and goals of the repair facility.

Installing the complete line of Symach systems takes about three weeks. Following this, Symach trains the repair shop’s technicians to work efficiently with all the equipment. For this purpose, it would ideally be more efficient to invest in the full line from the very beginning, notes Pawlowski.

“We are deeply involved in the collision repair market on a global scale and are aware of the changing/emerging technologies in vehicles and what it takes to repair them. Most of our new layout designs include the space required for ADAS calibrations. Space allocations to optimize productivity is one of the many things we address,” adds Pawlowski.

Vision for the shop

For Knox, working with the Symach equipment in the new facility has been great so far. The CARSTAR banner puts the shop in a more advantageous position. “Time will tell how it will work out with the CARSTAR banner combined with the Symach systems. It has worked so well with CARSTAR for the other facility (CARSTAR Fredericton), especially because of the relationship the banner enjoys with insurers. We are completely out of space; we don’t have parking space and we don’t have room to book anybody. It’s been overwhelmed with business,” adds Knox.

“Roy is a visionary by installing these systems and bringing this proven technology to Atlantic Canada,” concludes Dave Meery, Eastern Zone Director, CARSTAR. “Steve is deeply involved in the industry as part of the CCIF steering committee and an I-CAR instructor, so he understands what the future of the industry will look like and how to properly equip his team to thrive in the advancing environment.”

Here is a look into the fun-filled opening day celebrations and the state-of-the-art Symach equipment installed in the new CARSTAR Fredericton North facility. 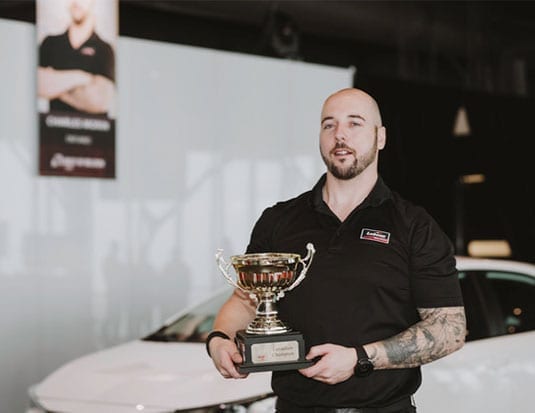 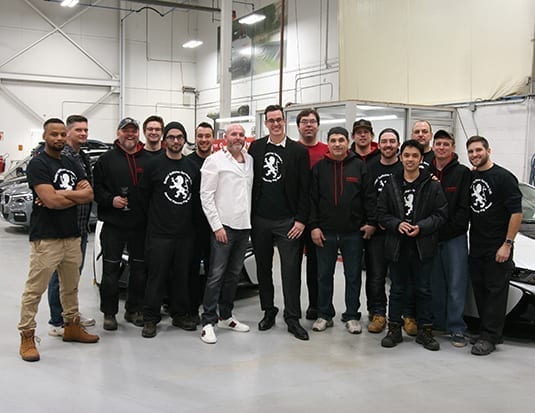