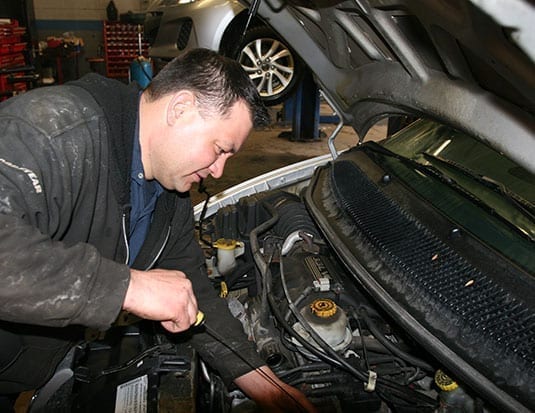 In today’s engines, the oil does a lot more than simply lubricate the moving parts. It also serves as an actuator for technology used within the engine, largely geared toward improving fuel economy and lowering emissions.

Let’s look at one example—cylinder deactivation—that shuts down some of the engine’s cylinders under light throttle to boost fuel economy. To make this system operate, the lifters are controlled using oil pressure to activate or deactivate each cylinder.

To work effectively, the system requires the proper oil with the right viscosity, especially during colder temperatures. If there is any restriction in the flow of oil, the system won’t function properly, which can lead to drivability issues. In the worst-case scenario, the valves may hit the pistons, resulting in major engine damage.

Besides having the right oil for the engine, scheduling a maintenance plan so it’s changed regularly (allowing the engine to maintain optimal performance) is critical.

This isn’t always as simple as it might seem.

Over the last number of years, we’ve seen OEMs extending oil change intervals, meaning that from new, a vehicle is recommended to have its oil changed at 16,000 km or even up to 21,000 km where in the past it was often between 5,000-8,000 km. A major factor behind this has been environmental considerations and by any standard that is a worthy goal.

However, there is a downside to extending service intervals. Because the oil no longer just lubricates and is responsible for features such as cylinder deactivation and valve timing, it is crucial to keep it clean. All motor oils are designed to keep dirt particles in suspension. Over time these particles build up, which can cause friction and premature wear on engine surfaces if the oil isn’t changed regularly. Additionally, these particles can clog the paper filament inside the oil filter, causing a bypass valve to open in the filter and allowing those particles to continue circulating through the engine. The result can be drivability issues, loss of performance and engine damage.

Another issue is fuel contamination in the oil. We’ve had a few cases where owners driving a specific vehicle with an OEM recommended interval of 21,000 km (the same spec oil another OEM requires for its vehicles with a 12,000 km service interval) have run into problems. When you have a climate like we do, the extreme changes in temperature mean that engines require more fuel on start up. That fuel ends up in the crank case.

Oil on its own doesn’t burn very well, but mix it with fuel and it becomes highly combustible. When we see these vehicles come in with the recommended 21,000 km service interval, it’s not uncommon to find no oil on the dipstick, as the engine has burned through a litre of oil since its last interval.

This can become a problem, especially if the customer is only visiting your shop once a year. Our recommendation, regardless of the OEM requirements, is to book customers in at 8,000 km/four month intervals. By doing so you can inspect the vehicle, inspect the oil and also take a look at any other items that might need addressing, such as suspension components, exhaust brakes and tires.

It’s a far more effective strategy to perform regular inspections than having customers fork out large sums of money for costly repairs due to lack of maintenance.